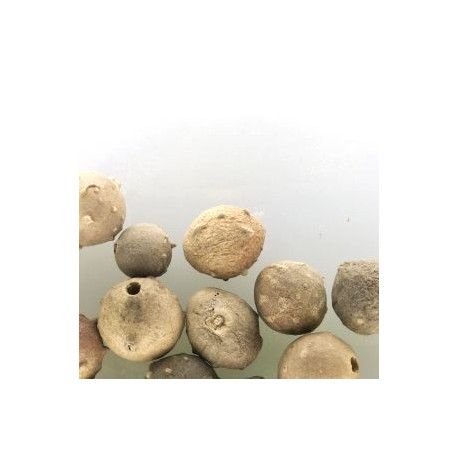 This product is no longer in stock

Notify me when available

An oak apple is a mutation of an oak leaf caused by chemicals injected by the larvae of certain kinds of gall wasp. They are so called because the gall, which ca n measure up to 5 cm in diameter but is normally on ly around 2 cm, looks like an apple. The oak galls used in commerce and medicine are exc rescences on the Quercus infectoria , a small oak, indigenous to Asia Minor and Persia, and result fro m the puncture of the bark of the young twigs by th e female Gallwasp, Cynips Gallae-tinctoria, who lays its eggs inside. The common Oaks of this country are much affected by galls. They occur sometimes on the leaves, where they form the socalled ak-apples, sometimes on the shoots, where they do great mischi ef by checking and distorting the growth of the tre e. The young larva that hatches from the egg feeds upo n the tissue of the plant and secretes in its mouth a peculiar fluid, which stimulates the cells of the t issues to a rapid division and abnormal development resulting in the formation of a gall. The best Aleppo galls, collected in Asiatic Turkey, principally in the province of Aleppo, are collect ed before the insect escape. Aleppo Galls of good qual ity are hard and heavy, without perforations, dark bluish- green or olive green, nearly spherical in shape, 12 to 18 mm. in diameter (about 2/5 to 4/5 inch), and known in commerce as blue or green galls. The chief constituents of Aleppo or Turkey Galls are 50 to 70 % of gallotannic acid, 2 to 4 % of gallic acid, mucilage , sugar, resin and an insoluble matter, chiefly lig nin. If collected after the insects have escaped, galls are of a pale, yellowish-brown hue, spongy and ligh ter in weight, perforated near the center with a small hol e. These are known in commerce as white galls . They contain less gallotanic acid than the lue or r een On breaking a gall, it appears yellowish or b rownish- white within, with a small cavity containing the re mains of a larva of the Gall-wasp. Galls have no ma rked odour, but an intensely astringent taste, and sligh tly sweet after taste. English Oak Galls, or Oak Apples, are smooth, globular, br own, usually perforated and much less astringent than Aleppo Galls, containing only 15 to 20 % of ga llotanic acid. They have no commercial value. China Galls ??produced by a species or Aphis on Rhus semialata ??are used mainly for the manufacture of tannic and gallic acids, pyrogallol, ink, etc. They are not spherical, but of extremely diverse and ir regular form, with a thick, grey, velvety down, making them a reddish-brown color. They contain about 70 % of gallotannic acid. Mecca Galls, from Bassorah, known as ala nisana, are spheric al in shape and surrounded about the center by a circle of horned protuberances. Galls are used commercially in the preparation of g allic acid and tannic acid, and are extensively use d in tanning and dyeing as well as for the manufacture o f ink.

Be the first to write your review !